Melanoma is the most serious form of skin cancer. However, if it is recognized and treated early, it is nearly 100 percent curable. But if it is not, the cancer can advance and spread to other parts of the body, where it becomes hard to treat and can be fatal. While it is not the most common of the skin cancers, it causes the most deaths. The American Cancer Society estimates that in 2007, there will be 8,110 fatalities, 5,220 in men and 2,800 in women in the U.S. The number of new cases of melanoma is estimated at 59,940. Of these new cases, 33,910 will be in men and 26,030 in women. Melanoma is a malignant tumor that originates in melanocytes, the cells which produce the pigment melanin that colors our skin, hair and eyes. The majority of melanomas are black or brown. However, some melanomas are skin-colored, pink, red, purple, blue or white.

Everyone is at some risk for melanoma, but increased risk depends on several factors: sun exposure, number of moles on the skin, skin type and family history (genetics).

Sun exposure - Both UVA and UVB rays are dangerous to the skin and can induce skin cancer, including melanoma. Blistering sunburns in early childhood increase risk, but cumulative exposure also is a factor. People who live in locations that get more sunlight — like Florida, Hawaii, and Australia — get more skin cancer. Avoid using a tanning booth or tanning bed, since it increases your exposure to UV rays, thus increasing your risk of developing melanoma and other skin cancers.

Moles- There are two kinds of moles: normal moles — the small brown blemishes, growths, or "beauty marks" that appear in the first few decades of life in almost everyone — and atypical moles, also known as dysplastic nevi. Regardless of type, the more moles you have, the greater your risk for melanoma.

Skin Type- As with all skin cancers, people with fairer skin are at increased risk.

Family History- About one in every ten patients diagnosed with the disease has a family member with a history of melanoma. If your mother, father, siblings or children have had a melanoma, you are in a melanoma-prone family. Each person with a first-degree relative diagnosed with melanoma has a 50 percent greater chance of developing the disease than people who do not have a family history. If the cancer occurred in a grandmother, grandfather, aunt, uncle, niece or nephew, there is still an increase in risk, although it is not as great.

Personal History- Once you have had melanoma, you run an increased chance of recurrence. Also, people who have or had basal cell carcinoma and squamous cell carcinoma are at increased risk for developing melanoma.

Weakened Immune System - A compromised immune system resulting from chemotherapy, an organ transplant, excessive sun exposure, and diseases such as HIV/AIDS or lymphoma can increase your risk of melanoma.

Warning Signs: The ABCDEs of Melanoma

Moles, brown spots and growths on the skin are usually harmless — but not always. Anyone who has more than 100 moles is at greater risk for melanoma. The first signs can appear in one or more atypical moles. That's why it's so important to get to know your skin very well and to recognize any changes in the moles on your body. Look for the ABCDEs of melanoma, and if you see one or more, make an appointment with a dermatologist immediately.

Asymmetry- If you draw a line through this mole, the two halves will not match.

Border - The borders of an early melanoma tend to be uneven. The edges may be scalloped or notched.

Color - Having a variety of colors is another warning signal. A number of different shades of brown,

tan or black could   appear.  A melanoma may also become red, blue or some other color.

Diameter- Melanomas usually are larger in diameter than the size of the eraser on your pencil (1/4 inch or 6 mm),

but they may sometimes be smaller when first detected.

Evolving - Any change in size, shape, color, elevation, or another trait, or any new symptom such as bleeding,

itching or crusting points to danger.


Prompt action is your best protection. The pictures below show atypical normal moles and melanomas.

The basic types of Melanomas fall into four categories. Three of them begin in situ, meaning they occupy only the top layers of the skin and sometimes become invasive; the fourth is invasive from the start. Invasive melanomas are more serious, as they have penetrated deeper into the skin and may have spread to other areas of the body.

Superficial spreading melanoma - By far the most common type, accounting for about 70 percent of all cases. This is the one most often seen in young people. As the name suggests, this melanoma travels along the top layer of the skin for a fairly long time before penetrating more deeply.

The first sign is the appearance of a flat or slightly raised discolored patch that has irregular borders and is somewhat geometrical in form. The color varies, and you may see areas of tan, brown, black, red, blue or white. This type of melanoma can occur in a previously benign mole. The melanoma can be found almost anywhere on the body, but is most likely to occur on the trunk in men, the legs in women, and the upper back in both.

Lentigo maligna- Similar to the superficial spreading type, as it also remains close to the skin surface for quite a while, and usually appears as a flat or mildly elevated mottled tan, brown or dark brown discoloration. This type of in situ melanoma is found most often in the elderly, arising on chronically sun-exposed, damaged skin on the face, ears, arms, and upper trunk. Lentigo maligna is the most common form of melanoma in Hawaii. When this cancer becomes invasive, it is referred to as lentigo maligna melanoma.

Acral lentiginous melanoma - Spreads superficially before penetrating more deeply. It is quite different from the others, though, as it usually appears as a black or brown discoloration under the nails, on the soles of the feet or palms of the hands. It is the most common melanoma in African-Americans and Asians, and the least common among Caucasians.

Nodular melanoma- Usually invasive at the time it is first diagnosed. The malignancy is recognized when it becomes a bump. It is usually black, but occasionally is blue, gray, white, brown, tan, red or skin tone.

The most frequent locations are the trunk, legs and arms, mainly of elderly people, as well as the scalp in men. This is the most aggressive of the melanomas, and is found in 10 to 15 percent of cases.

When it comes to the early stages of the disease, the future is bright. Most people with thin, localized melanomas are cured by appropriate surgery. Early detection still remains the best weapon in fighting skin cancer.

More treatments are available for more advanced disease. The cure rate continues to rise. Research has produced a greater understanding of melanoma, leading to the development of new drugs. A Brevard Skin and Cancer Center physician will go over all treatment options with you. 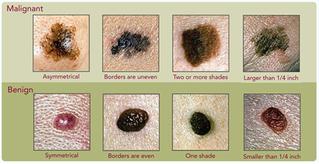